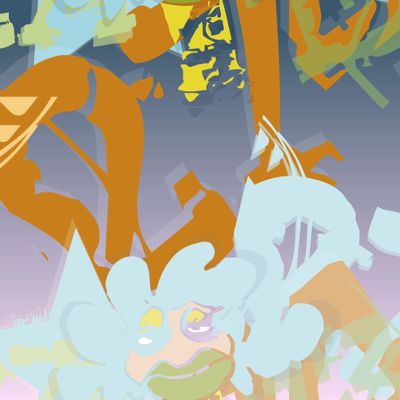 Netherlands, Amsterdam
The Norwegian born Stumpo, is first and foremost an artist, with a total conception of what he is creating. To account accurately for the range of his talent, Stumpo's work must be considered that of a painter, photographer, illustrator, web-programmer, sculptor and film maker. He is a true visionary, who uses the best means available to communicate his world.

The extraordinary freedom of Stumpo's work often takes us by surprise. As an artist he takes elements from everyday life and raises them to the very limits of abstraction, making his art a bridge between our dreams and his own imagination. Niko's universe is inhabited by unique abstract cartoon-like drawings, characters which emerged from his childhood and have now become the trademark to a very identifiable and in demand style.

Whether it's an invitation to speak at the top design conferences such as Semi - Permanent Sydney or the Toca Me Conference in Germany, to numerous art exhibitions in such prestigious galleries as the George Pompidou in Paris to the Riviera Gallery in New York, Niko's work has profoundly influenced a generation of creative minds. As a former art director of Wieden + Kennedy Amsterdam, Niko has developed visual communication and award winning campaigns for such high profile companies as MTV Italy, Sony PS2, Nike, Condé Nast, L'Oréal Paris, Powerade and Heineken.

Many of Niko's pieces are showcased on his personal web site, abnornalbehavioralchild.com. The site is a beautiful journey through a decade of acclaimed international success.

It was only a matter of time before Niko applied his vision to yet another medium, Fashion! In the Summer of 2004, Niko along with longtime friend and business partner Christian Palmiotto launched their own label called Aiko. Starting life on the streets of Amsterdam and Milan, Aiko (meaning Ai = Love & Ko = Everyone) rapidly began defining a new era of streetwear, where street knowledge meets design and fashion melts with art. Aiko is an explosion of unique characters, vibrant colours, kick ass graphics and punchy slogans such as "Death & Glory", "Don't Mind A Little Pain" and "Destroy Everything For A Better Tomorrow".

Now he just opened Hanazuki, a studio and a store, together with Hanneke Metselaar where they keep developing their own products and producing works for clients such as Nokia, Nickelodeon, Mtv, Oneill, Goretex among others.It's a place in the center of Amsterdam where creativity runs free.