News
Kinomural is audio-visual art and the urban tissue combined. Project realizes the site-specific idea. It is going to be created a gigantic open air gallery in a specific architectural context placed in the city of Wroclaw, Poland. The event will transform side walls of buildings into enormous canvases for moving murals, ephemeral projections in various forms – from video art through sound performance and experimental films, to audiovisual installations. The works tackle various subject matters – some revolve around abstraction and focus on the form, other allude to poetry, social, philosophical, and existential issues.

Within this year’s edition, for the first time in Kinomural’s history, there is an OPEN CALL to audiovisual artists from around the world. The motto of the open call is a quote from Nick Cave’s song “Fireflies”.

„We are photons released from a dying star
We are fireflies a child has trapped in a jar”.
Fireflies. Fragile and ephemeral creatures. The lifetime of mature members of the species is so short that they don't take nourishment. Many cultures have seen them as symbols of lost souls whose light came from gods to bring hope. The practical use of the light they produce is mostly to lure partners for mating, to ensure continuation of the species.

Photons. One of the most mysterious elements in the Universe. Their characteristics are both those of particles, as well as those of electromagnetic waves. This cosmic speck has no weight, and time does not exist for it – it is immortal, inasmuch as it will live for as long as our universe exists. As amazing as it is, it is the most common and frequent particle in the universe.

The former ones are where biology meets fantasy. The latter seem to have such a glaringly obvious nature that we don’t even try to understand their antonymous nature.

Do they have anything in common?

Is the photon a function of the firefly, or the firefly a function of the photon? Are we – humans – closer to unwary fireflies from Cave’s song, creatures whose biological existence is determined by fate? Or does our truest nature resemble that of photons, and is our sublimeness backed by pure science? Is our adventure a journey of a firefly or that of a photon? Or maybe it is both at the same time, just like in the case of photons with their unfathomable wave-particle nature. What are we and what is it that surrounds us? What was the idea that the author of this project had in mind? Many have claimed to have discovered the truth...

The poet will be defeated by sleep and hunger before he describes what the painter can express in one instant*. We search for audiovisual works that use uncommon means to tackle this intriguing homework given to our species by who-knows-whom and who-knows-why.

PRACTICAL INFORMATION
OPEN CALL Kinomural 2022 is directed to all artists regardless of their age or formation. Works enrolled to the OPEN CALL may be created for the purposes of the enrollment, although we also accept pre-existing creations from their author’s portfolio.

OPEN CALL Kinomural 2022 goes in 2 stages:
1. Selection of works that will be presented in the form of large-scale projections on side walls of the buildings located in one of the districts of Wroclaw.
2. Contest, to award the authors of three selected works. Prizes amounting to 2000 PLN (~430 euro) each have been funded by the Patron of the Contest – OKRE Development.

All works submitted to the OPEN CALL presented during Kinomural in September 2022 will take part in the contest, which will end with granting three awards. The Organizer will announce the winners via the communication channels of Kinomural on September 25, 2022. 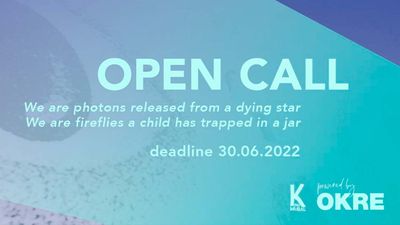